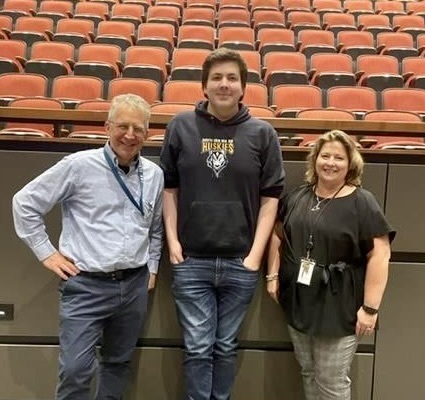 Recently Robert Bowker received SRTC’s Career and Technical Education Student of the Year award at a statewide ceremony. Bowker,  a senior from Sanford High School, was nominated by his Information Technology and Networking instructor, Fredric Gluck. In his nomination, Gluck describes Bowker as “an outstanding student and an example of all we value here at SRTC.” Gluck added that Bowker is “a self-directed student who is willing and able to assist other students in the class. He is an integral part of the solid and well-focused learning community that this class has become over their two years together.” Bowker credits an early introduction to the program as a sophomore with helping him decide that information technology was a career he wanted to learn more about. During his time at SRTC, Bowker found that the IT field suits him and offers a range of career opportunities both locally and nationally. Bowker has competed in the state SkillsUSA contest, winning gold this year in the Internetworking contest. He has also been involved in the National Technical Honor Society at SRTC. This fall, Bowker will be attending the University of Southern Maine majoring in computer science with a minor in cybersecurity.  Pictured are instructor Fredric Gluck, Robert Bowker and SRTC director Kathy Sargent