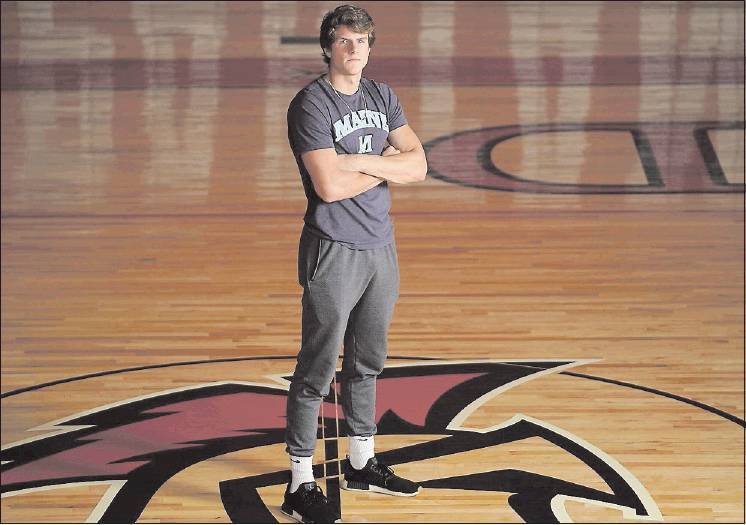 Leyton Bickford, a 6-foot-6 senior at Sanford High, has committed to playing basketball at the University of Maine. This fall, he is playing wide receiver and defensive end for the Spartans.

When Leyton Bickford was a 5-foot-11 seventh-grader, he dunked a basketball for the first time. Now 6-6 and 215 pounds, the Sanford High senior will sign a national letter of intent in November to play basketball at the University of Maine.

Last winter, Bickford averaged 17.8 points and 11.2 rebounds. The Springvale resident has an academic average of over 100 and is also a standout wide receiver and defensive end for the Sanford football team.

Q: You committed to a scholarship offer from the University of Maine in April. Why did you make that decision in your junior year, and why Maine?

A: Well, I felt Maine was the perfect fit for me education-wise. At that time I wanted to go into engineering but now I’m going into business. And also, I’m representing Maine and that’s a big thing to me. I like Maine a lot and I think it’s perfect for me. That’s why I committed early.

Q:I (heard) you set a goal to go to Maine when you were relatively young?

A: When I was a freshman, you know how they make you write a letter to your senior self? I wrote that I should be committed to Maine for basketball.

Q: Signing day for the national letter of intent is coming up pretty soon (Nov. 13). How do you view that? Is that about you or is that more about the community?

A: Definitely more about the community. I think (in) Sanford there’s always a vibe that you can’t make it out of Sanford, like we’re just stuck here. And I kind of want to show that you can really do anything. It just takes work. I think me and (University of New Hampshire women’s basketball commit) Paige Cote have shown that because we’re both Division I players.

Q: That kind of speaks to how you have always been in the shadow of other players. As a sophomore it was Terion (Moss of Portland). Last year it was (Scarborough’s Nick) Fiorillo who was getting the ink early. I’m as guilty of that as anyone. Did you kind of play with a bit of a chip on your shoulder because of that?

A:I always knew I could play with them. I knew I wasn’t getting the recognition and I would hope that it would come and it did.

Q:I also read that your club coach, Robert Pilsbury of Blue Wave, said if you extended the recruiting process you could play at a, quote, ‘mid-major or higher’ level. Did you think about that?

A: Honestly, I really didn’t think about that because my goal was to play at Maine. It was academically where I want to go. It’s in the state of Maine and I’m representing Maine. And I felt once I got that offer, honestly, that’s where I wanted to go.

Q: Twice today you’ve said, ‘I want to represent Maine.’ Why is that so important to you?

A:I just love Maine. We don’t get enough credit and everyone underlooks us so I love representing Maine and I’d love to wear “Maine” across my jersey.

Q: They haven’t had a strong program lately, so what are your goals once you get there?

A: Well, I want to win games and I think Coach (Richard) Barron is also looking for the same ideas. So I’m hoping we can turn something around and start getting some wins. Because last year they didn’t have a good season but there were so many games where it was so close.

Q: What do you think maybe you’ve learned from not having everything handed to you? From not playing for the powerhouse (high school) program?

A: Well, I think it proves that you do have to work. To be the best, you have to work no matter what. The powerhouse programs you always see them working, always in the weight room, and I think our (senior) class has that. We pride ourselves in being athletes.

Q: So you made this commitment to basketball but you also decided you wanted to come back and play football. Was that at all a tough decision and why did you want to play football?

A: That was a terribly tough decision. I wanted to work on basketball and there was always that risk of getting hurt but I’ve been playing football since I was 8 years old and at one point it was my favorite sport. So, I could not miss out my senior year. I hope it finishes strong because we have a really good team.

Q: I heard that you taught yourself to play the piano?

A:I just always have liked music. I have a piano at my house so I just started playing. I’m trying to learn (to read music). I think I’ll be able to by the time school’s over. I just like it and sometimes I’ll have free time.

Q: Any other hidden interests or talents?

A:I can solve a Rubik’s Cube. During class one day I had one and tried to solve it and I learned how to do it.

Q: What do you hope to accomplish in this last year of high school?

A:I want to win basically. I hope to get a state championship. That would be crazy for Sanford so I hope we can pull something off because we’ve got athletes in this class. And I hope I get 1,000 (career) points because I’m on track. As long as I keep doing what I’m doing I should get there.